TORONTO, March 8, 2019 /CNW/ – Since its inception in 2015, CBC Music Presents Playlist Live is known within the music industry as the ultimate show to attend after the JUNO Awards. Best known for showcasing a hybrid of incredible Canadian music talent under one roof, each CBC Music Presents Playlist Live show is a one time experience with walk-on performances and epic collaborations featuring legendary Canadian music icons alongside today’s leading talent.

Traditionally, a VIP, invitation-only event, show producers ent! Marketing (ent!) are offering a limited run of general admission tickets for this year’s show. The event takes place immediately following the JUNO Awards on Sunday, March 17th at the London Music Hall (185 Queens Avenue, London, ON). Doors open at 9:00 PM and the show begins at 10:30 PM. Limited tickets are available through Ticketmaster starting on Friday, March 8th at 10:00 AM for $40.00 (CAD).

On Sunday, March 17th, 24 artists will take the stage for a live, 2-hour mini music festival lineup celebrating the best in Canadian Music. More details on the show’s performers will be announced prior to the event.

This year’s Playlist theme features songs that were written or performed by Canadian women, inviting each artist to perform one original and one cover song from the theme list.

“Each year, Playlist grows in scope, size, and excitement. At the root of the Playlist concept – we continue to focus on the extraordinary talent that Canada boasts. Each show is unique, as new moments in music history are created live on stage. Seeing and hearing our nation’s music icons collaborate with the newest and brightest stars in the business is truly epic – we love bringing this concept to life and are thrilled to open the doors to everyday music fans this year.”shares Libby Biason Principal and Chief Music Strategist, ent!

Presented by CBC Music, the show will stream live at CBCMusic.ca/junos, the free CBC Gem streaming service, and CBC Music’s Facebook, Twitter and YouTube pages. Together, ent! and CBC Music have set the standards for a truly Canadian show ensuring talent showcased includes 50% gender parity and 30% diversity – guaranteeing an inclusive and distinct program.

The Goodyear Blimp Returns To Europe 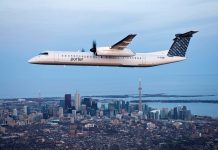